Renewable energy is becoming more accessible and with a wide range of resources available, the benefits of switching to green are becoming more prominent.

Our most recent Annual Fuel Mix Disclosure showed that 96% of our electricity came from renewable sources from 1st April 2017 to 31st March 2018. This is significantly higher than the UK average, as highlighted in the below table:

WHAT ARE FOSSIL FUELS?

Fossil fuels are the most common way to generating energy. Coal, oil and natural gas are all fossil fuels, formed deep under the Earth’s surface thousands of years ago. The problem with these fuel sources is that they can’t be replaced – once they’re used then they are gone and there is no way of getting them back.

They are also large contributors of pollution, climate change and global warming; which are becoming increasing issues across the UK and the entire world.

Because of this, new technologies have been developed to reduce our dependency on fossil fuels for electricity generation, these are known as renewable or “green” energy sources.

WHAT IS RENEWABLE ENERGY?

Renewable energy, also known as ‘green’ or sustainable energy, is produced by natural sources. Solar, hydro and wind power are all examples of renewable energy sources, and unlike fossil fuels, they will naturally replenish when they are used.

WHY IS RENEWABLE ENERGY BETTER?

As the name suggests, they are renewable because the energy has derived from natural processes that are constantly replenished. Because of this, there is a lot less impact on the environment.

Businesses that use renewable energy show a positive commitment to sustainability values which can impact their brand image.

Renewable sources are also much more readily available across wide geographic areas, so they are available in remote areas that otherwise wouldn’t have access to electricity.

WHAT TYPES OF RENEWABLE ENERGY ARE THERE?

There are many different types of renewable energy; solar, wind, hydro-power, biomass and geothermal. Solar, wind and biomass are the top contributors to electricity generation, as highlighted in the Chart 1 below.

The table at the beginning of this article show that renewable fuel sources made up 29.04% of the total electricity produced in the UK (Digest of UK Energy Statistics) during 2017-18.

Chart 1 below highlights the breakdown of different renewable fuel sources this comes from: 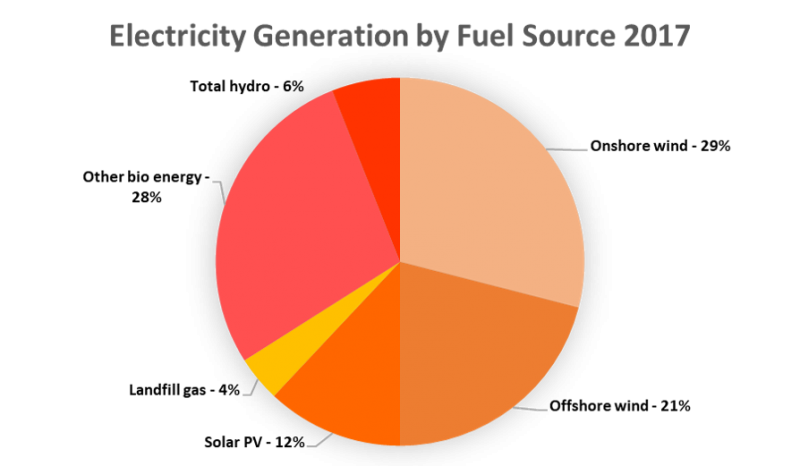 Solar energy is radiant light and heat from the sun. It is captured by photovoltaic cells on large panels, known as solar panels, which then turn the sunlight into electricity. This is one of the most naturally recurring renewable energy in the UK.

One limitation of solar energy is that sunlight is not consistent, the amount of sunlight the panels receive varies on location, time of day, season and weather conditions. This can have a big impact on the production of this type of renewable energy.

Wind energy is captured through large turbines with the air pushing through to rotate the blades and create kinetic energy. Stronger winds produce the most energy, so turbines are usually placed in areas of high altitude or off-shore locations, as these provide the best conditions.

More recently there have been developments for bladeless turbines. This technology could be the future of wind energy as it is low maintenance and uses no blades, getting energy from wind through oscillation without gears, brakes or oils.

Biomass is organic material from plants, wood or animals that contains stored energy from the sun.

Plants contain absorbed energy from the sun (gained through photosynthesis), which is then burned to produce energy in the form of heat. This energy-rich material is a renewable resource because the plants can then we replaced and harvested to form more material.

BUT IS RENEWABLE ENERGY RELIABLE?

Reliability of supply is one of the biggest obstacles for Britain running on near 100% renewable power. Solar and wind power rely on the weather and can’t be created on demand, so switching to renewable power requires us to find more efficient ways to create and store energy in order to distribute it later.

HOW CAN WE STORE RENEWABLE ENERGY?

The energy storage solutions available today allow businesses to invest in their own renewable energy projects and benefit from their excess energy. By using battery storage they can consume the energy at a later date, or sell it back to the grid to reduce their energy costs.

Many energy suppliers, like ourselves, offer Power Purchase Agreements to help support businesses renewable and sustainable energy projects by selling their energy back to the National Grid.

WHAT IS THE FUTURE FOR RENEWABLE ENERGY?

The shift to renewable energy is rapidly growing; in May/June 2019, the UK went 18 days without using coal-generated electricity for the first time since the 19th century.

As renewable generation becomes more popular, equipment costs are likely to decrease and it will become easier for businesses to generate their own electricity to sell back to the grid.

New emerging technologies are being developed to help increase renewable energy generation. There are talks about the development of integrated solar photovoltaic in conventional building materials, to increase the widespread use of solar energy. For example; photovoltaic glass made into windows or used for sky scraper buildings or roofs (Source: Future Energy Scenarios report).

There could also be technologies developed to harness wave and tide generated power which is much more predictable and controllable than wind or solar energy (Source: Money Supermarket).

There is a lot to look out for in the future of renewable energy generation, making it an exciting step to reducing the carbon footprint around the world.

ARE YOU INTERESTED IN RENEWABLE ELECTRICITY IN YOUR BUSINESS?

The Renewable Energy Guarantee of Origin scheme (also known as the REGO scheme) is a scheme administered by Ofgem that gives consumers transparency about the proportion of electricity that energy suppliers source from renewable generation.

Energy suppliers are issued one REGO certificate per megawatt hour (MWh) of eligible renewable output that they source from generators of renewable electricity. This provides proof to the end customer that the energy was produced through renewable sources.

The primary use for REGOs is for the Fuel Mix Disclosure, which requires all electricity suppliers to disclose the mix of fuels used to generate their electricity.

For more information on our annual fuel mix disclosure or our green electricity plans, contact us on 0115 975 8258.

The Deregulated Water Market: Could It Save You Money?

GET A QUOTE
We use cookies on our website to give you the most relevant experience by remembering your preferences and repeat visits. By clicking “Accept All”, you consent to the use of ALL the cookies. However, you may visit "Cookie Settings" to provide a controlled consent.
Cookie SettingsAccept All
Manage consent

This website uses cookies to improve your experience while you navigate through the website. Out of these, the cookies that are categorized as necessary are stored on your browser as they are essential for the working of basic functionalities of the website. We also use third-party cookies that help us analyze and understand how you use this website. These cookies will be stored in your browser only with your consent. You also have the option to opt-out of these cookies. But opting out of some of these cookies may affect your browsing experience.
Necessary Always Enabled
Necessary cookies are absolutely essential for the website to function properly. These cookies ensure basic functionalities and security features of the website, anonymously.
Functional
Functional cookies help to perform certain functionalities like sharing the content of the website on social media platforms, collect feedbacks, and other third-party features.
Performance
Performance cookies are used to understand and analyze the key performance indexes of the website which helps in delivering a better user experience for the visitors.
Analytics
Analytical cookies are used to understand how visitors interact with the website. These cookies help provide information on metrics the number of visitors, bounce rate, traffic source, etc.
Advertisement
Advertisement cookies are used to provide visitors with relevant ads and marketing campaigns. These cookies track visitors across websites and collect information to provide customized ads.
Others
Other uncategorized cookies are those that are being analyzed and have not been classified into a category as yet.
SAVE & ACCEPT